Hype House on Netflix: Know the Cast Members of the New Show, and Learn About Their Life Struggles! 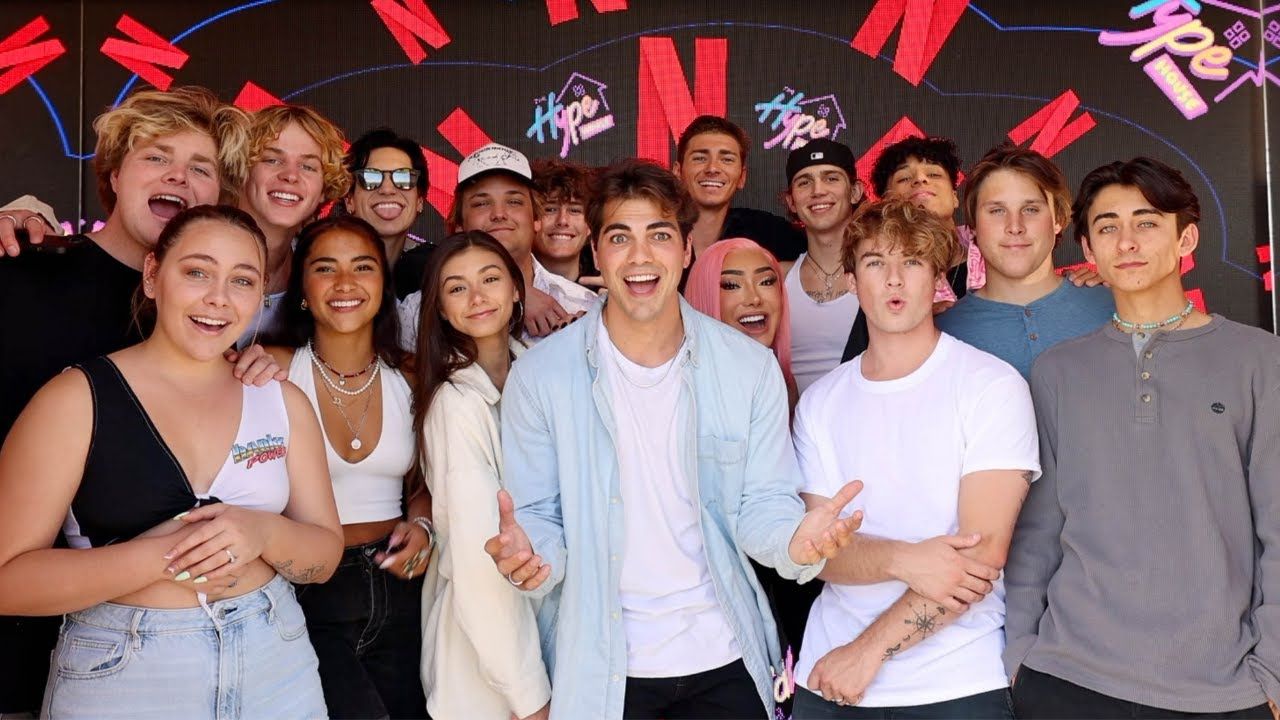 Hype house is a new Netflix show that premiered on January 7, 2022. The show is all about famous tiktokers, YouTubers and creators from different platforms living in one big mansion creating content while telling their stories and struggles behind their success. It's a show where you can see friendship, love, fame, and even drama between these creators.

Before the show's release, Netflix uploaded a trailer of the Hype House on YouTube, which was the most hated show before even its release. The hate towards the show was insane; many people got angry over Netflix for making Hype House, canceling other top series over this show, such as "The Society" canceled after 1 season, Chilling Adventure of Sabrina canceled after season 4, Anne with an E, and "I'm Not Okay" series got canceled.

But after the show was released, undoubtfully, many people changed their views towards Hype House; There are plenty of positive comments and positive responses towards the hype show. The show is the perfect example of not believing everything on social media; you might not know what you think you know; In reality, their personalities could be opposite of what you thought, and who knows! Their stories might make you tear up; if you watch the show till the end, you will have a different mindset towards the show.

Let's know these content creators and Read the article until the end to learn about them.

Chase Hudson is an American singer and a media personality. He is known as Lil Huddy, and his e-boy look and adorable looks attracted many people and fans worldwide. He has 11.9M followers on Instagram and 32.4M followers on TikTok, with over 1.7 billion likes. Hudson came to the spotlight after dating the famous TikTok star charlie D'amelio, and their love lasted only two months. Hudson used to be bullied by his classmates during his childhood for different personalities and looks; there's so much more about him that you couldn't resist watching this show to know him.

Who doesn't know about Nikita Dragun? Being a trans influencer, YouTuber, beauty content creator owning a beauty brand, she has managed to gain numerous fans and followers on her social media. She started her youtube channel in 2013, and through the ups and downs, she finally achieved what she always wanted as a transgender person.

Nikita always creates controversies, knowingly or unknowingly; she always comes into the spotlight now and then. However, you can't deny that she gives other transgender hope and courage to not give up on their dreams. In this show, Nikita talks about her struggles in childhood and overcoming stress, trauma to fit in the society.

Larry is an American you tuber; he is known for uploading hilarious content on the internet; larry has an undoubtfully great sense of humor; this might be why many fans and followers like him. In December 2019, larry was nominated for the breakout creator category at the 9th stream awards. He is a charmer in the hype house; you wouldn't want to miss him.

Sienna Mae Gomez creates content based on positive aspects; she uses her platform to spread positivity. after being in controversy for sexually assaulting her ex-boyfriend Jack Wright. People call her fake and an attention seeker; however, sienna denied the rumors, yet both are cast for the hype house. It will be interesting to find out what will happen if these two are reunited in the same house.

Alex Warren is a YouTuber who posts vlogs about skateboarding and stunts. He inspires so many youths just through his videos; he has gained massive followers and fans on his social media account. Alex is currently dating Kouvr Annon and has been in a relationship since 2018. Surprisingly, both are in the hype house, and people will get to see the chemistry between them in the show.

Alex has over 14.7 million followers on the TikTok account and 2.66million subscribers on his YouTube channel; he has often been compared to David Dobrik, a vlogger, which he completely denies.

Jack Wright is the youngest cast of hype house; he is 18 years old and recently completed high school. Jack is famous for his TikTok videos, where he makes content about his lifestyle and posts comedy videos. If you guys remember, his ex-girlfriend is also cast in the Hype House; there will be plenty of drama awaiting you if you haven't watched the show yet.

The cover is a fitness guru, model and social media influencer. She is the youngest female cast member on hype house; the 22-year-old TikTok star has over a 13.6million flowers and 430million likes on TikTok.currently, she is dating Alex Warren, who is a famous YouTuber, and both are cast in hype house. It will be intresting to watch them in the show.